Several Democrats have proposed a top income tax rate of 70% on incomes over $10 million.

Samuel Hammond argues that it is NOT about the optimal tax rate, soaking the rich, the rate in the past. It is a symbolic attack on the legitimacy of wealth accumulation itself.

Its goal is not about tax-fairness or raising revenue efficiently (which it fails at on both counts). Its goal is to popularize a strict egalitarian view of wealth accumulation as prima facie evidence of personal corruption. If that view catches on, it would represent a major setback in the public’s understanding of the differences, both normative and economic, between productively acquired wealth and rent seeking.

The Democratic Socialist’s economic model is Scandinavia. But we in the U.S. have our own economic model, and culture based on our own history. We are more individualist.

With the countercultural rebellions of the 1960s and 70s, followed by the Reagan Revolution of the 1980s, the left and right eventually reverted back to America’s historically more individualistic ethos of self-expression and entrepreneurship.

In Scandinavia, the dominant conformist zeitgeist is called the Law of Jante, a reference to a fictional Danish town that enforces being ordinary in every possible way. “Tall poppy syndrome” is perhaps the closest concept in American vernacular, although it doesn’t do the oppressiveness of Scandinavia’s egalitarian milieu justice. Excessive ambition is frowned upon while non-conformists are treated with suspicion, as illustrated by the expression, “You are not to think you’re better than us.”

The cost of this strict egalitarianism. In Scandinavia, the rich stay rich and everybody else is stuck. They’re economic opportunity is a snapshot frozen in time. Nobody can rise up because they are taxed too much to save anything that can be invested.

In short, Ocasio-Cortez’s focus on soaking the small number of Americans who make more than $10 million in a year has earned her socialist bona fides while ironically sparing — if not threatening to entrench — the closest thing America has an to emerging nobility. That’s not radical. Far from it. It’s conformism to the most mundane progressive politics imaginable.

We are Americans. They are trying to force 300+ million people to behave the way they deem worthy. No. Move to your utopia. Leave us alone. These people are tyrants and must be stopped.

Businesses don’t exist to create jobs. If readers doubt this they need only try to raise start-up funds with “creating jobs” listed at the top of their business plan. Lots of luck finding investors when your goal is costs, as opposed to returns.

Crucial here is that the desire for returns among investors is what indirectly leads to copious hiring. Workers enable the returns that entice those with means to delay consumption in favor of the investment without which there are no companies, jobs, and progress.

People need to invest first before jobs are created. Invest in start-up as above, themselves to enhance their usable skill-set, in ideas, innovations, physical structures, machines, processes, stocks, bonds.

Up front, Lowry’s focus on wages is rooted in a surprising conservative belief that compensation has long been stagnant in the U.S. Ok, but if the latter were even remotely true then it would also be true that the U.S. would not presently be showered with imports from around the world. Stated simply, a law of economics (Say’s) embraced by conservatives disproves a popular conservative narrative of the moment. We’re only able to consume insofar as we’re able to produce first. That wages are supposedly stagnant in the U.S. is further evidence that the economic statistics followed by economists and pundits aren’t worth their attention.

Its the measurement of wages and income that needs fixing.

This one’s a keeper. Read the whole informative thing.

Elected officials and government officials are trying to calm the financial markets. In the U.S., President Trump, Treasury Secretary Steve Mnuchin, and various Federal Reserve bank officials are the latest to weigh in. They’re wasting their time. Example here.

I have news for them, and you: market participants don’t care what you say. They do what they think is right. Market participants include traders, institutional investors, sovereign wealth managers – all over the world.

Financial markets – stocks, bonds, commodities, currencies – do not react to current news items. They have their own cycles based on sentiment.

The financial media – the business channels on television, the media outlets that carry their stories – all basically say the same thing. And it changes by the day, but all contradict themselves.

When the market goes up and some kind of negative news is reported, the media say “the market shrugged off the bad news and rose today”. When the market declines, they are certain it was caused by whatever news they can find as a way to justify their claim.

The bottom line is that the majority of politicians, government officials, media people, and market participants do not know what caused financial markets to act the way they do.

The Fallacy of the Zero-Sum Game

The first of these fallacies is the belief that market activities, especially exchange, are zero-sum games. Zero-sum games are those in which the total gained from playing the game is zero. So, for example, if each of five people playing poker buys into the game for $100, there is only $500 to be won.

We see this misperception of markets in a variety of forms. At the most general level, the belief that the rich get rich by impoverishing others is a species of zero-sum thinking.

The Fallacy That Order Requires Design

The second fallacy is the belief that economies require someone or some group to design and/or control them. Often this belief is linked to an argument from complexity: only a simple economy could be left to its own devices. Complex, advanced economies like those across most of the globe require human monitoring and regulation to function properly.

The flaw at the heart of this fallacy is that it ignores the idea of spontaneous or undesigned order.

The Fallacy that Consumption is the Key to Growth

The final fallacy is the belief that consumption is the source of economic growth. This belief is widely held by everyone from the citizenry at large up through economic journalists and politicians. We hear it every time the economy enters a recession and begins to recover. Pundits declare that consumers need to start buying things to generate a recovery, and reports about the latest data on consumer spending make the headlines.

In fact, consumption expenditures vary the least as economies go through booms and busts. The component with the greatest variation is private sector investment. If anything is needed during a recovery, it is more investment by the private sector, not more consumption.

The heart of the fallacy, however, is that consumption consumes things! When we consume goods and services, we destroy their value by using them up. Consuming food does not create anything valuable, it eliminates something valuable.

My post of late January on the Dow 30 Index mentioned that price had reached 20,000, in spite of negative rhetoric from media pundits and some investors about an imminent implosion of markets under President Trump’s economic agenda in the months leading up to the presidential election and to that date.

So, isn’t it possible the stock market rises and falls irrespective of what happens in Washington, DC? 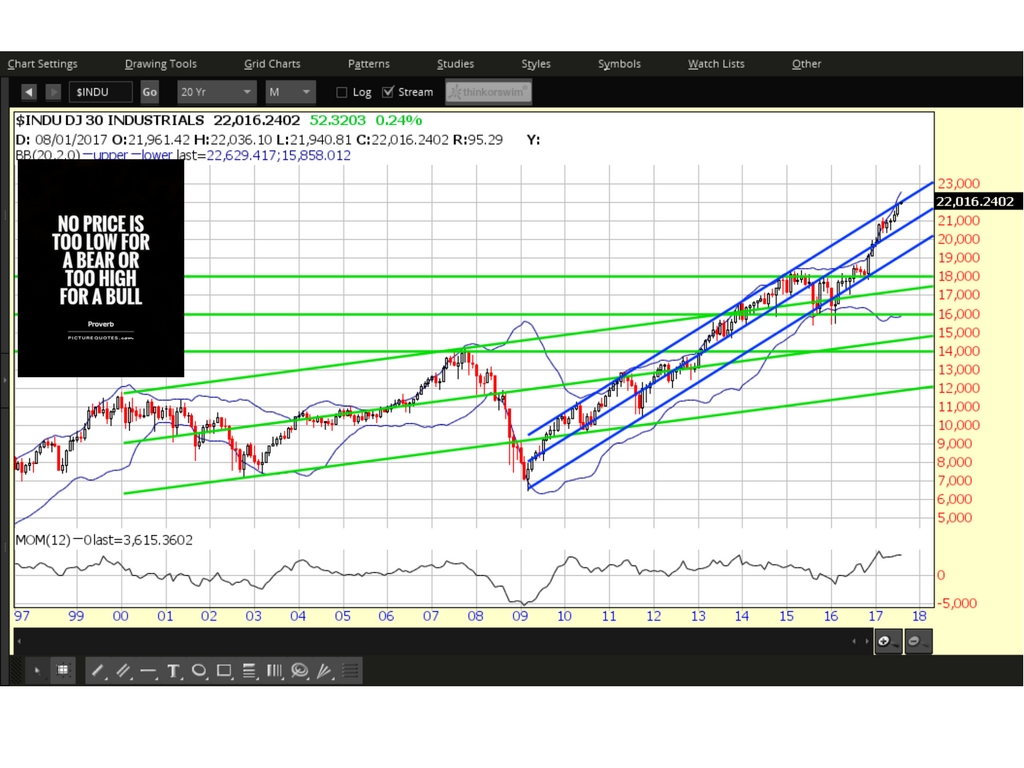 Notice how it still rose all during President Obama’s two terms, an era of supposed anti-growth economic policy? And as you can see, the rally after Election Day 2016 was just a continuation of the bull market. This picture puts in context the longer term market.

Here’s a closer look at the recent history. A continuation in the fourth quarter from Oct onward. Policy has no effect. 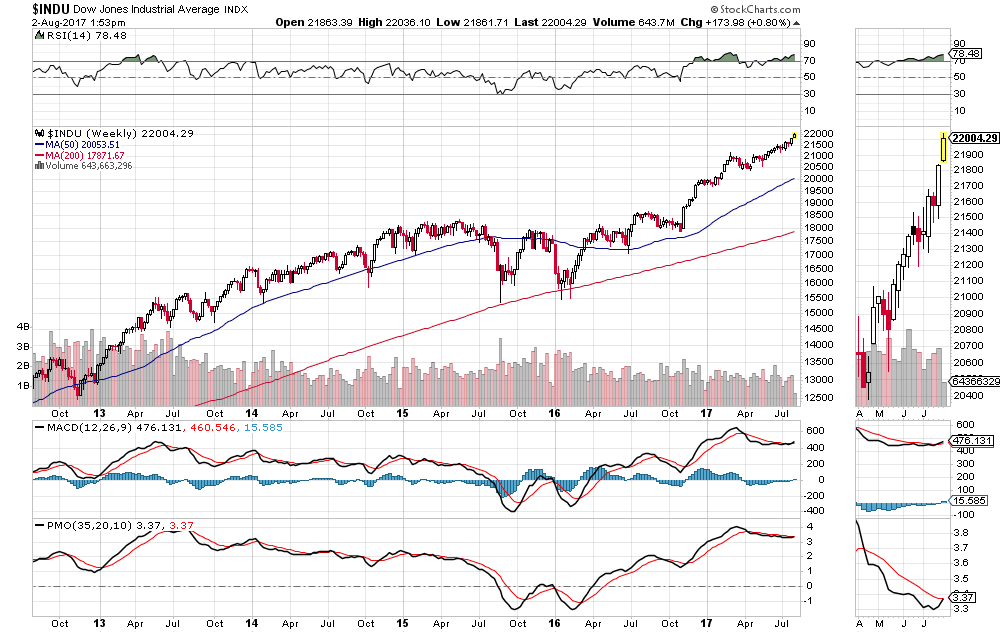 The answer to that question is I don’t know. There are lots of advertisements and commentators advocating to buy gold (and/or silver). They assert that some event or some government is doing this-or-that and it will affect its price. Its amusing how they map some event to a change in price of gold, silver, stocks, bonds, various currencies. According to them this event causes that outcome. When I use the word “map”, I mean cause-and-effect (causations) and correlations.

For example, as soon as October, here is former Republican congressman and libertarian firebrand Ron Paul.

“If our markets are down 25 percent and gold is up 50 percent it wouldn’t be a total shock to me,” said Paul recently on CNBC program Futures Now.

The mind automatically searches for events during that time. US President Bush, 9-11 terrorist attacks, the wars in Iraq and Afghanistan and now the broader Middle East, the widening globalization of economies, the financial meltdown of 2008, President Obama, Brexit (Great Britain voted to leave the European Union), then the surprise election of now President Trump. The price of gold jumped after Great Britain voted to leave the European Union, hit the aforementioned high in July, 2016 but then fell again. It didn’t jump after Donald Trump beat favorite Hillary Clinton. Good luck trying to map those events to the price of gold.

If you think, “its a dangerous world out there”, that does not cut it either. Its always been. There’s always something to worry about. Why have stock markets rallied so high in such a dangerous world? The S&P 500 US stock market index rallied more than 200 percent during President Obama’s two terms. And during that time government imposed a lot of economic regulations and taxes on the American people. Yet stocks rose.

If you want to buy gold, you can do so through this convenient interface to eBay’s offerings. That link has all different sizes and shapes. Yes, you can buy gold on eBay using credit card and Paypal. This link narrows down gold for between $25 and $250.

Investors, as opposed to traders, buy stocks in companies whose profits they expect to rise. The conventional wisdom says stock prices will follow profits up, but over the last two business cycles, that simply has not happened.

In March 2000, the S&P 500 first closed above 1500. Since corporate profits  are up 135 percent but stocks have made virtually no gain since over the last thirteen years.

Buying stocks does not seem to pay any more, because most of the increased value created by higher profits has been captured by hedge funds, electronic traders, private equity funds, aggressive M&A shops, and trading desks at investment banks, which have multiplied over the last two decades.
. . .
The ordinary investor is simply out gunned. For him stocks have become a rigged game.

Disagree. The reality is that the stock market, as represented by the S&P 500 Index, has been in a secular (long-term) bear market since March, 2000 because stocks became severely overvalued in the 1990’s. Stocks went up so high investors could not justify the reward for the risk. 2000 was the apex. They are overvalued based on various measures such as the price-to-earnings (P/E) ratio.  When stock valuations get too high stocks become too risky to hold for long periods.  Value investors demand a Margin of Safety to compensate for the risks of investing in them. During the timeframe from March, 2000 through today the stock market has traded in a broad range, and it has traversed this range up-and-down several times. These traverses are cyclical bull and bear movements within the secular bear market, just as the stock market goes up and down during secular bull markets. This is the nature of markets; a new secular bull market will emerge — sometime.